WTI crude oil prices slightly weakened this past week despite ongoing uncertainties about the impact of Russia’s attack on Ukraine and a global economy that continues to open in the post-pandemic world. The sentiment-linked commodity was likely pressured by a combination of a rising US Dollar and a deterioration in risk appetite. The S&P 500 fell about 2.75% last week.

This past week, Fed Chair Jerome Powell front-loaded 50-basis point rate hikes to the point that markets increasingly expected 3 meetings in a row of such deliveries. Not to mention that quantitative tightening is also just around the corner. In fact, using a 4-week moving average to smoothen weekly percent change in the Fed balance sheet and S&P 500, the former entered shrinking territory as the latter saw the worst monthly performance since early February.

Rising rate hike expectations, and risk aversion, worked to propel the US Dollar higher last week. Oil is mostly priced in the latter in global markets. When the Greenback appreciates, it can at times drag down the commodity. With that in mind, all eyes turn to key US economic data in the week ahead. These include the first estimates of Q1 GDP and the central bank’s preferred inflation gauge.

The world’s largest economy is expected to grow just 1.1% q/q, down from almost 7% in the fourth. That would be the slowest pace of acceleration since the immediate aftermath of the 2020 global pandemic. Prior to that, you would have to go back to the end of 2018 to see similar growth rates. Meanwhile, the PCE core deflator is expected to tick down to 5.3% y/y in March from 5.4% prior.

Could the latter imply peak inflation? That remains to be seen, but the data would likely cement a 50-basis point hike next month. It should be noted that volatility in oil prices has been on the decline – see data on the chart below. Still, a 4-week moving average of the ATR (average true range) remains just around levels from the aftermath of the 2020 Covid outbreak. With that in mind, the threat of further risk aversion and a stronger Greenback could continue offsetting the supply woes and demand that are propping up crude oil prices. 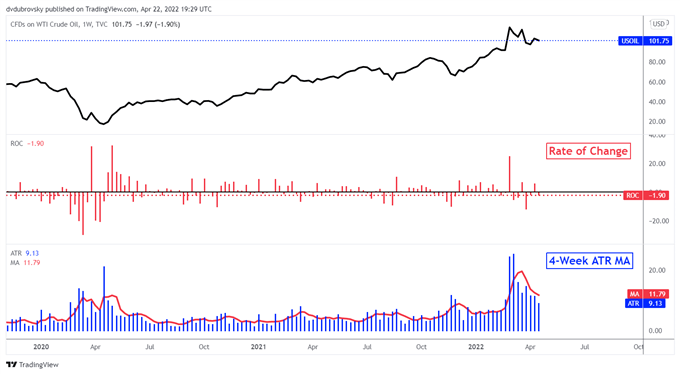