Mounting worries over the quickly spreading Delta Covid variant’s impact on the global economy solidified further this week after Goldman Sachs and JP Morgan Chase downgraded economic outlooks on China. Goldman sees third-quarter growth slowing to 2.3% from 5.8%. A rebound in the fourth quarter may transpire, however, but the full-year projection remains worse off as restrictions are seen hampering consumption in the Chinese economy. Nearly 100 locally sourced cases were reported on Monday, according to China’s National Health Commission.

The downbeat outlook weighed on crude oil and iron ore prices, two major commodities that are particularly insightful to gauge demand in the world’s second-largest economy. Crude oil fell nearly 2% on Monday, while the global benchmark, Brent, sank just over half a percent. Meanwhile, iron ore prices added to recent losses, extending the monthly drop to almost 10%. Iron ore prices are highly reliant on Chinese demand, given it is the largest importer of the mineral ore.

The drop in prices may help ease some inflation pressure in the economy. Beijing moved to release state reserves of certain commodities in recent months, including crude oil and iron ore, to cool rapid price increases. The PBOC has also taken a variety of measures to support monetary policy, including a reduction in reserve ratio rates to spur bank lending. Balancing the recovery against growing inflation threats will remain key for Chinese authorities.

Still, China saw inflation – via CPI – rise 1.0% in July, while producer prices climbed 9.0% in the same time frame. Rising producer prices sometimes translate into higher prices for consumers down the road if producers feel the need to pass on higher input costs to consumers. Meanwhile, lockdowns in Australia are likely to drag on after New South Wales (NSW) reported 356 new virus cases on Tuesday. Overall, the Delta variant’s spread is now having a tangible and visible impact on global sentiment, particularly denting growth-sensitive commodities like oil and iron ore.

Crude oil’s technical posture has weakened substantially since reaching a multi-year high at 76.98 back in late July. Since then, prices have dropped over 10%. The 100-day Simple Moving Average (SMA) has also been breached this week. However, a trendline formed from the March low appears to be underpinning further losses. If prices pierce below the trendline, an extension lower may be likely. Alternatively, holding the trendline may see the preceding trend higher continue. 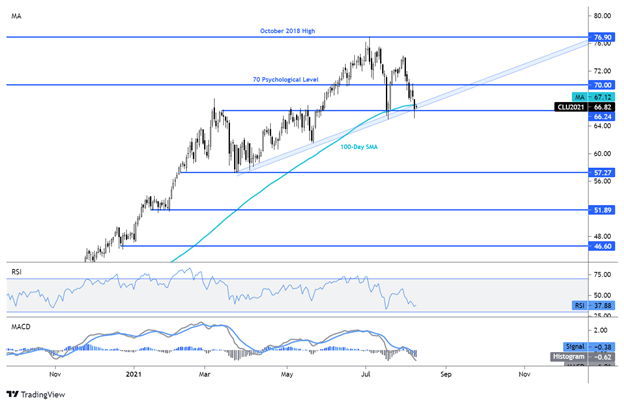 Iron ore prices have seen a sharp drop over the last few weeks, with a slice through the 100- and 200-day Simple Moving Averages (SMAs). A trendline from October was also breached with ease. Prices are over 20% lower since June, and the 2021 yearly gain is in danger of being wiped out. The April low at 158.10 appears to be providing a layer of support. Below that, the 2021 low at 146.55 may be endangered. Bulls may need to recapture the 200-day SMA to regain a solid footing to push higher. 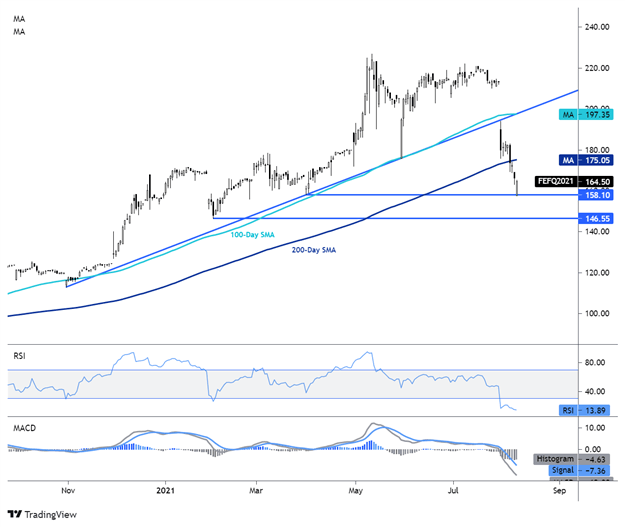