Canadian Dollar Outlook: USD/CAD Finds Support at 1.25 and Hasn’t Looked Back Since

Canadian Dollar Outlook: USD/CAD Finds Support at 1.25 and Hasn’t Looked Back Since

After a consolidatory few weeks, USD/CAD broke out from its sideways move as a result of crude oil news, geopolitics and Fed speak. Crude oil has continued its downturn after the U.S. and allied IEA member states decided to release strategic reserves to suppress higher oil prices. The Canadian dollar being so highly positively correlated to the price of crude oil has naturally weakened on the back of this slump. On the plus side, while the majority of ‘western’ aligned economies look to shy away from the heavy Russian crude, Canadian crude puts its hand up as the most attractive substitute.

Next week, theBank of Canada (BoC) rate announcement is scheduled (see calendar below) to move higher to 1% from 0.5% at present. Money markets have this largely priced in leaving little in the way of significant price action movement should this actualize.

The dollar has been the bane of the CAD’s existence after the Federal Reserve turned increasingly hawkish post FOMC minutes and via several Fed officials. U.S. inflation data next week may well add to dollar upside should actual data come in higher than expected. 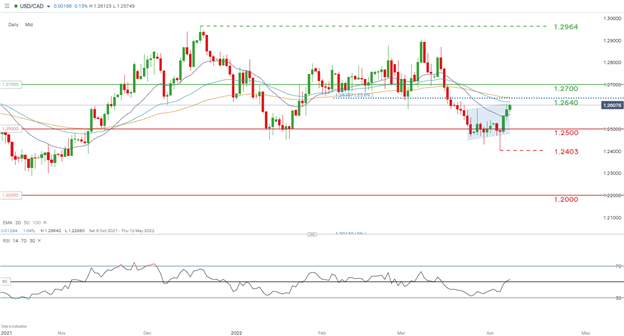 With talks around the 1.2000 support zone after the push lower on Tuesday, the swift reversal has been anticipated by Tuesdays lower long wick candle. What seems to be a developing bear flag formation (blue), we have three touch points at resistance and a breakout above could invalidate the pattern.

Short-term I do favor USD/CAD upside towards the 23.6% Fibonacci at 1.2640 and 1.2700 psychological levels before revisiting the fundamentals and technical.

IGCS shows retail traders are currently prominently LONG on USD/CAD, with 67% of traders currently holding long positions (as of this writing). At DailyFX we typically take a contrarian view to crowd sentiment but after recent changes in longs and shorts, sentiment reveals a BULLISH bias.