Not long after, the UAE energy minister contradicted the UAE ambassadorby stating that the Gulf state stuck by an output pact agreed with OPEC+. Price action has swayed ever since but remains a far distance from the recent high.

A lack of investment and storage constraints experienced by some OPEC + nations along with the return of pre-pandemic levels of demand have contributed to the soaring oil price, raising the question of whether OPEC (i.e. OPEC + and its allies minus Russia) could increase output to lower fuel prices. 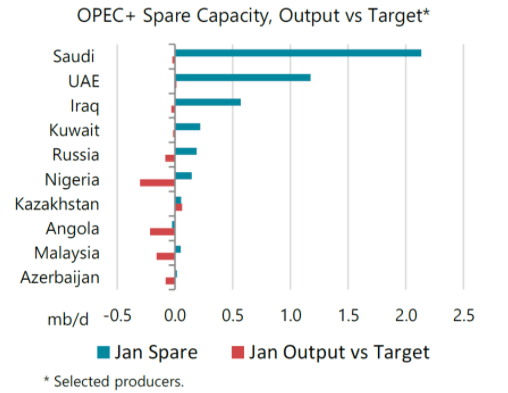 According to sources quoted by Reuters, Saudi Arabia, the UAE, Iraq and Kuwait together have an estimated 4 million bpd of spare capacity that can be brought onto the market within a 3-6 month period.

However, the 4 million bpd that could be available in a fairly short amount of time still falls short of the 7 million bpd produced by Russia, significantly reducing the possibility of a noticeable reprieve in surging oil prices.

Reasoning Behind the Bullish Crude Stance

Crude oil will continue to be a volatile asset for the foreseeable future. However, it is my view that oil prices remain susceptible to upside. Prices drastically declined on Wednesday on the back of comments of supply increases that were later invalidate. Prices dropped and we are yet to see a recovery back to the elevated prices prior to the 13% decline.

Hopes of the Iran Nuclear Deal being finalized within days has experienced a set back and appears to have stalled. Similarly, the opportunity of allowing Venezuela back into the market remains an option but thus far an agreement has not been forthcoming.

In the absence of confirmed additional oil supply into the market, combined with the fact that prices have not recovered to Wednesday’s levels, leaves the door open to higher crude prices next week.