On Wednesday, the International Energy Agency (IEA) announced that its non-US member countries would provide 60 million barrels of oil per day (bpd) to help cool elevated fuel costs that have been fanning recent inflationary pressures. The announcement comes after the US already confirmed that it would tap into its special petroleum reserves (SPR), withdrawing 180 million bpd which is set to result in 1 million bpd for 6 months.

The thinking behind this strategy is to add additional oil supply into the market since the majority of oil producers are already producing at, or near, their maximum capacity. The latest strategic release supports the strong political stance against Russia’s invasion of Ukraine and reluctance to accept Russian oil but questions remain over whether it will be enough to fill the overall supply shortage.

The combined releases should add a little over 1 million bpd while the gap from sanctioned Russian oil amounts to around 2 million bpd. On the topic of additional oil supply, at the end of last month OPEC decided to increase its output target for May by an additional 432,000 barrels per day instead of the usual monthly increase of 400,000 bpd. It remains to be seen whether such levels can be achieved in reality as a number of OPEC members have underproduced due to a lack of investment and capacity constraints.

Will the SPR Release Be Effective in Lowering Oil Prices?

The SPR releases are certainly necessary to contain oil prices in the short-term but the long-term effectiveness is questionable in the absence of demand destruction and a potential recession. In essence, the strategic releases will drawdown emergency oil reserves that will need to be replaced. The releases are set to run until the end of 2022 meaning that reserves are expected to be replenished in 2023, creating forward market tightness. Therefore, we may very well see lower oil prices in the short-term but could witness stubbornly high oil prices over the medium to long-term should the fundamental landscape persist.

Crude has pulled back phenomenally from the ‘peak panic’ around the time of the Russian invasion and first round of energy-based sanctions. Since then, the market has made successive lower highs with the absence of lower lows. Therefore, crude remains fairly well supported above the psychological $100 mark which remains as an important level for a potential bearish breakdown.

While the 100 mark is important, 95.60 level would be more telling of a bearish continuation as it marks the post-invasion low. The next level of support would be the 32.8% Fibonacci level at 91.75.

Higher prices from here should not be discounted. Yesterday’s candle and current price action reveals two lower wicks that tend to signal a rejection of lower prices around that 100 mark. A bullish move remains constructive above 102.60 with a break above 104.70 and the ascending trendline providing greater conviction to the longer-term uptrend. 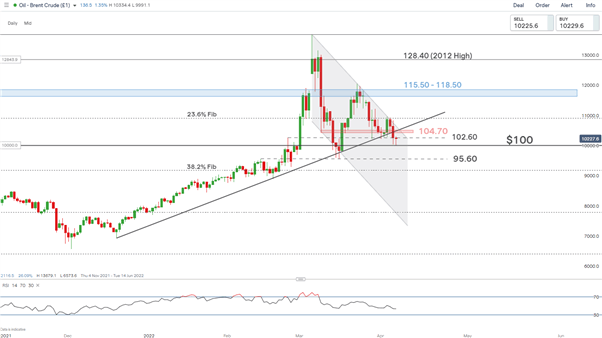