Bitcoin Weekly Forecast: Price Continues to Hold Key Support – Is a Breakout on the Cards?

Bitcoin Weekly Forecast: Price Continues to Hold Key Support – Is a Breakout on the Cards?

Despite a broader rally this past week in risk assets, Bitcoin has remained muted and constrained to a tight range below the $30,600 mark. Of late, Bitcoin has traded hand in hand with the Nasdaq 100, with some experts labeling Bitcoin as a ’24 hour Nasdaq proxy.” The pair however has decoupled this week, as Bitcoin posted 4 losing sessions from the last 5 despite the Nasdaq 100 snapping a 7-week losing streak. Is there a hangover from the recent stablecoin debacle, or is Bitcoin merely a laggard that will look to catch up in coming sessions? 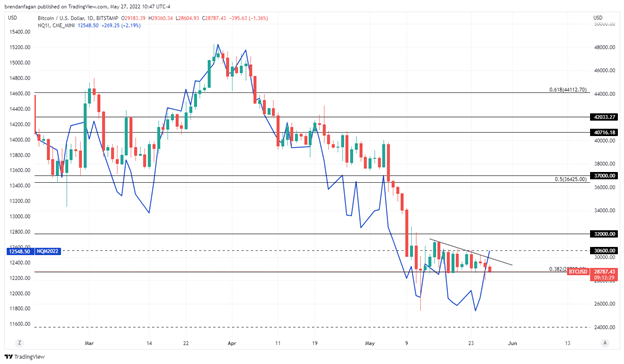 In a research note that came out this week, JP Morgan analysts said that Bitcoin’s fair value is roughly 30% above current levels, indicating the potential for “significant upside” in the crypto space. The note also revealed that crypto has become one of the investment bank’s preferred alternative assets, overtaking the likes of real estate and other commodities. 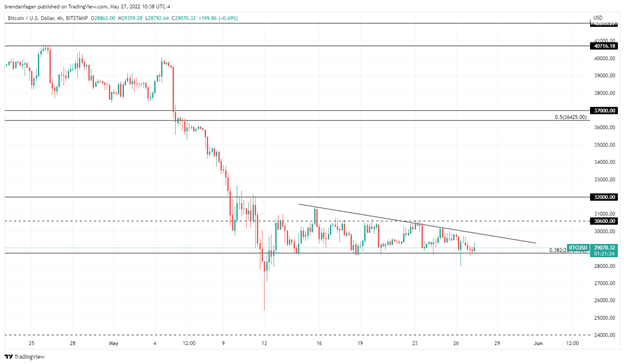 A sluggish macro climate has hit risk hard but crypto even harder, with Bitcoin down roughly 40% this year. Roughly $3 trillion of total market value in the crypto space has been wiped out since November, a fair reflection of the volatility and risk that has historically been associated with the asset class.

As mentioned, there has been a notable divergence between equities and bitcoin this week as risk has caught a relief bid. While Bitcoin has failed to follow it’s Nasdaq peer higher, it has so far continued to hold Fibonacci support around $28,730. Upside momentum has been capped by stiff resistance at $30,600 as well as a descending trendline that has formed over the last couple of weeks. The formation of this descending triangle may indicate that a breakout could soon be on the cards.

If Bitcoin can break through that $30,600 level, price may squeeze to prior resistance around $32,000 before any serious retracement towards $40,000 can take place. While support at $28,730 has held up remarkably well for the last 2 weeks, it could crumble should risk appetite come under additional pressure. In any break to the downside, traders may look to test the May 12 lows just above $25,000, which provided a springboard into the range we currently find ourselves in. While a sustained rally may be overdue for a beaten down asset, near-term direction remains finely poised as market participants digest an ever-shifting macroeconomic climate.

Whether you are a new or experienced trader, we have several resources available to help you; indicator for tracking trader sentiment, quarterly trading forecasts, analytical and educational webinars held daily, trading guides to help you improve trading performance, and one specifically for those who are new to forex.