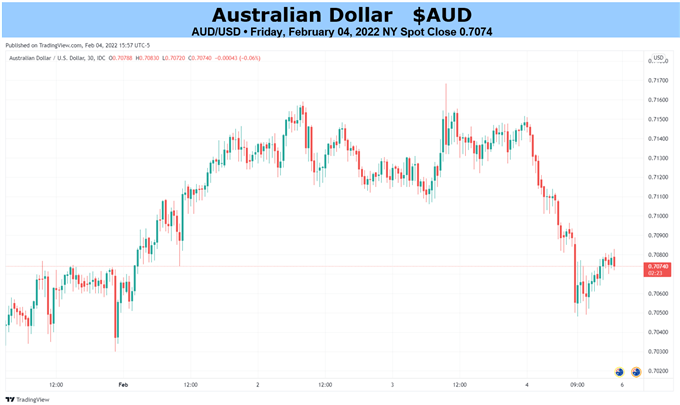 The Australian Dollar whipsawed this week as the RBA monetary policy decision was dissected, and then ignored. The market then returned to focusing on the US Dollar rather than domestic factors.

The RBA abolished the asset purchasing program at their meeting on Tuesday but left the cash rate unchanged at 0.10%. Technically, the RBA have tightened, quantitatively (QT).

A notable difference in the post meeting statement was the absence of rate hike guidance.

Previously they had said that they did not see rates rising until 2024 or “possibly” in 2023. The market had dismissed this and was pricing in rate hikes for this year.

Then on Wednesday, RBA Governor Philip Lowe did not rule out a 10-basis point hike by the end of the year.

The bank said that for rates to rise, underlying inflation would need to be sustainably within the mandated 2-3% target range. Their preferred price growth measure – the so-called ‘trimmed mean’ – is currently growing at an annual rate of 2.6% and has had two quarters above 2%.

In its Statement on Monetary Policy released on Friday, the RBA said that it sees headline inflation running at 3.75% in June and expects underlying price growth to hit 3.25% at that time.

The chart below is from the RBA and illustrates their current underlying inflation reads. 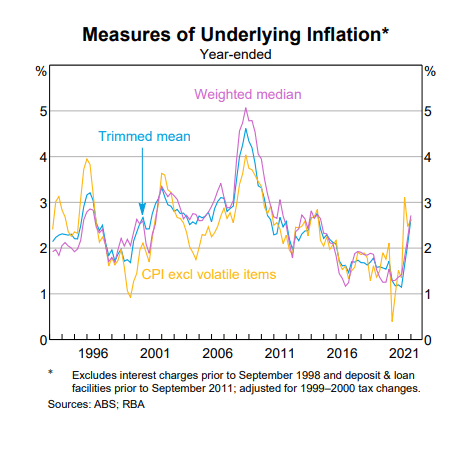 This reluctance to raise rates is at odds with the Federal Reserve in the US, where they have explicitly stated that the lift-off for rates is likely to happen at their next meeting in March. The Fed’s asset purchase program will also end in March after a period of gradual tapering that began in the fourth quarter of last year.

After the Fed’s meeting the US Dollar rallied, which saw AUD/USD go lower and sneak below the November 2020 low of 0.6991.

However, over the course of the last week, a number of Fed speakers have come out and hosed down the markets’ expectations for five 25bps rate hikes this year. This has seen AUD/USD rally again.

Recently, the Bank of Canada (BOC), the Bank of England (BOE) and the European Central Bank (ECB) have all become more hawkish than they were previously. The Reserve Bank of New Zealand (RBNZ) and the BOE have already started raising rates.

One could argue that higher commodity prices are once again underpinning the Aussie. But when AUD/USD is overlaid with the US Dollar index (DXY), iron ore and crude oil, as a proxy for energy commodity exports, it is more apparent that it is the USD that is driving AUD/USD.

With the central bank action out of the way for now, the focus will be on US inflation figures due Thursday. Aside from that, the rest of the data is mainly second tier and can be viewed here.

Any further guidance from Fed speakers on US rates is something to look out for. 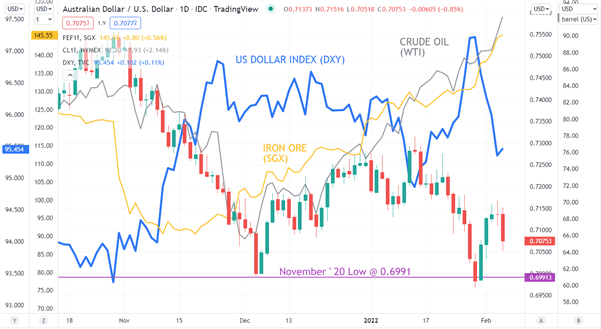