The Australian Dollar raced higher to start last week as markets decided to get busy with some risk-on attitude.

It then consolidated through the week before getting another leg up going into the weekend thanks to increasing risk appetite on the back of an improving outlook for Chinese tech companies.

The Australian election was also run and won with Labor taking office for the first time in nine years. There was zero impact on markets as there was very little difference in policy between the major parties.

The fundamental backdrop remains strong for the Australian economy, but it might be fraying at the margin.

Despite Alibaba and Baidu beating sales expectations on Friday, the persistence of China pursuing a zero-case Covid-19 policy means that the prospects for Australia’s largest export market have had their growth outlook downgraded.

China has reduced their imports of liquefied natural gas (LNG) by 18% from a year earlier to the end of April according to data from Refinitiv. Australia is the largest exporter of LNG globally.

In itself, this is not too problematic for Australia as there are many other large customers of LNG. The impact of the war in Ukraine means that there are willing buyers of the energy source elsewhere around the world.

But what it does highlight is that the world’s second largest economy is slowing, and other Australian exports are at risk of seeing a deceleration in demand. In particular, the iron ore that satiates Chinese demand.

Due to the volume of iron ore traded between Australia and China, contracts are negotiated for the long-term. They roll over in time, but short-term fluctuations in price and demand have little impact to the bottom line.

If the Chinese economy continues to be sluggish for a prolonged period, it may undermine the Aussie.

While that is playing out, AUD/USD is also at the mercy of US Dollar gyrations. The Fed appears to have toned down their language on hyper aggressive rate rises beyond the June and July Federal Open Market Committee meetings (FOMC).

This has seen the US Dollar peel back from 20-year highs seen 2-weeks ago. If that continues to unfold, it could send AUD/USD higher. 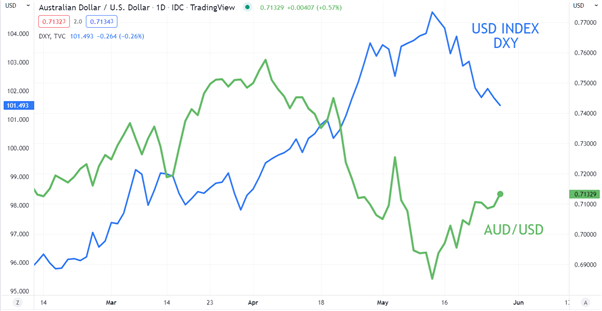