The risk-sensitive Australian Dollar is moving higher as the Asia-Pacific trading week comes to a close. Traders ditched the safe-haven US Dollar during Thursday’s Wall Street trading session after an upbeat labor report. Initial jobless claims in the US dropped to 340k for the week ending August 28, down from the prior week and beating analysts’ expectations. This may have eased some concerns that Covid may be dragging on the current recovery.

Traders are laser-focused on Friday’s non-farm payrolls report (NFP), which will be used to gauge where the Fed could go with policy. Analysts expect the figure to cross the wires at +750k, slightly lower than July’s 943k print. The NFP number will be the last one before the Federal Reserve’s Open Market Committee meets later this month. With the central bank’s inflation target already met, jobs are of critical importance.

Today brings a few data points that may provide some market reaction, although directional shifts are unlikely on the eve of the US jobs report. Australia’s August Ai Group construction index crossed the wires this morning at 38.4, down from 48.7 in July. The final PMI print for August from Markit Economics showed a second straight month of contraction. To cap the week off, July’s final retail sales report will be published. Finally, traders will be watching China’s Caixin services PMI figure for August.

The Australian Dollar tumbled through the summer months as the Covid Delta variant forced state premiers in Victoria and New South Wales (NSW) to implement restrictive lockdown measures. Some economists now fear that those lockdowns will translate into a contraction in economic growth. However, Australia is making progress in its vaccination campaign and widespread lockdowns may soon be a thing of the past. AUD/USD may have already priced in a dire scenario, which may fuel additional upside once the rise in cases ebbs.

The Australian Dollar is coming off its lowest mark of the year versus the US Dollar. As of last week, non-commercial traders , typically consisting of speculators, have started to roll back bullish bets on the currency, although those bets remain near 2021 highs. That rollback likely reflects the downbeat action seen through August as Covid fears dragged the Aussie Dollar. The Commodity Futures Trading Commission (CFTC) will release an update report during Friday’s US session. The data will shed light on where speculators see the Australian Dollar going as September commences. 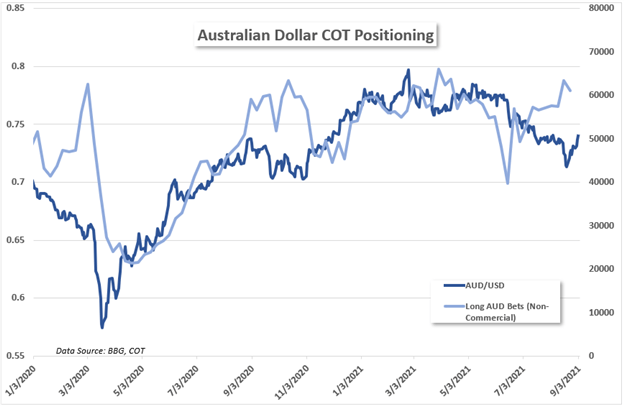 AUD/USD has fully retraced its post-wedge breakdown. However, upside momentum appears to be slowing after breaking above its 50-day Simple Moving Average (SMA). The Relative Strength Index (RSI) is shifting lower while in overbought territory above the 70 mark. This may see prices fall back to the 50-day SMA. A break lower would likely see the 78.6% Fib level or prior trendline come into focus. 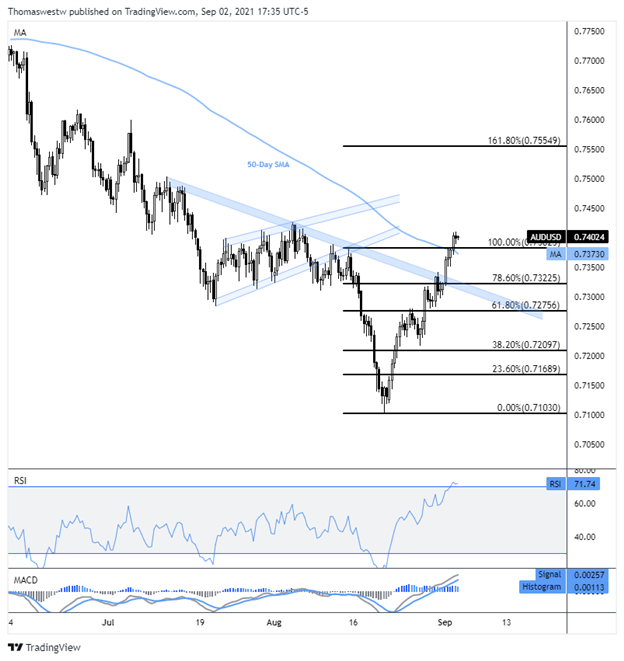