AUD/USD has come up against trendline resistance after reversing ahead of the November 2020 low (0.6991), and the update to Australia’s Gross Domestic Product (GDP) report may generate a breakout in the exchange rate as the economy is expected to grow at a record pace.

AUD/USD appears to be responding to the descending channel from earlier this year as it struggles to extend the advance following the Kansas City Fed Economic Symposium, and the exchange rate may continue to track the downward trend as the Reserve Bank of Australia (RBA) retains a wait-and-see approach for monetary policy.

It remains to be seen if Australia’s GDP report will sway the RBA as the economy is projected to expand 9.2% per annum in the second quarter of 2021, which would mark the fastest pace of growth since the data series began in 1960, and a positive development may put pressure on Governor Philip Lowe and Co. to switch gears as the “central scenario was still that the Australian economy would grow strongly again next year.”

However, the RBA seems to be on a preset course as the board plans to “continue with the bond purchase program at a reduced rate of $4 billon a week, once the second $100 billion of purchases is complete in September 2021,” and a lackluster GDP report may keep AUD/USD within a downward trend as Governor Lowe and Co. warn that “the current virus outbreaks and lockdowns had interrupted the recovery.”

In turn, the deviating paths for monetary policy may produce headwinds for AUD/USD ahead of the next RBA rate decision on September 7 as a growing number of Federal Reserve officials show a greater willingness to switch gears, but a further recovery in the exchange rate may generate a shift in retail sentiment like the behavior seen earlier this year. 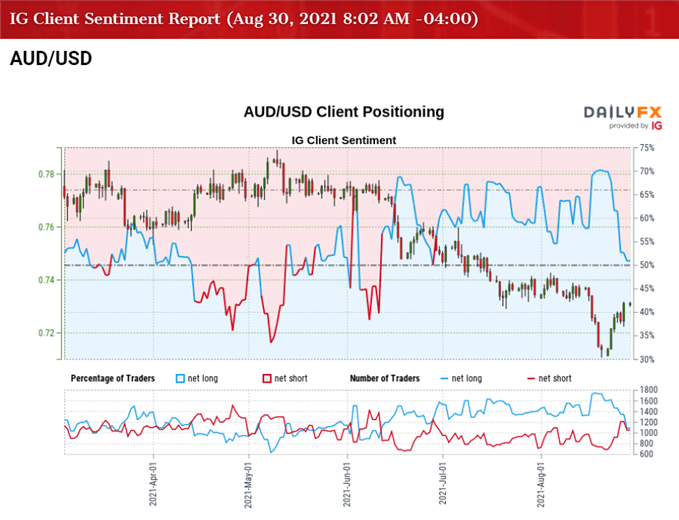 The IG Client Sentiment report shows 50.84% of traders are currently net-long AUD/USD, with the ratio of traders long to short standing at 1.03 to 1.

The number of traders net-long is unchanged than yesterday and 39.70% lower from last week, while the number of traders net-short is unchanged than yesterday and 38.89% higher from last week. The decline in net-long interest comes as AUD/USD struggles to extend the advance following the Fed symposium, while the rise in net-short interest has alleviated the crowding behavior as 64.98% of traders were net-long the pair last week.

With that said, AUD/USD may attempt to break out of the descending channel from earlier this year as Australia’s GDP report is anticipated to show a robust recovery, but a lackluster development may keep Aussie Dollar within the bearish formation as the 50-Day SMA (0.7388) continues to reflect a negative slope, with the trajectory in the moving average largely aligning with the downward trend in exchange rate.