AUD/USD Rises From Oversold Levels Ahead of RBA Minutes

AUD/USD Rises From Oversold Levels Ahead of RBA Minutes

Discover what kind of forex trader you are

A risk-on trading session in New York may boost Asia-Pacific stocks today. The S&P 500, in a broad-based rally led by technology, real estate and communication services, gained 2.65% on Monday. The US Dollar fell against its major peers, excluding the remarkably weak Japanese Yen. The USD DXY index fell around 1%, which should provide a tailwind to emerging markets and commodity-led economies.

The Australian Dollar rose around 1.5% throughout the European and US trading hours, taking advantage of the broad USD weakness and the generally upbeat market tone. However, copper prices fell despite the broadly weaker Greenback. A surprisingly weak Empire State Manufacturing Index (-9 versus an estimated -4) for October from the New York Federal Reserve showed slowing factory activity across its region.

New Zealand’s third-quarter inflation rate fell to 7.2% from 7.3% on a year-over-year basis. That beat economists’ expectations of 6.5% y/y. Overnight index swaps (OIS) show a 35.7% chance for a 75-basis point rate hike at the RBNZ’s November 23 meeting. The island nation’s September trade balance is due to cross the wires later this week, which may provide NZD with its next directional cue.

The Reserve Bank of Australia’s minutes for its October policy meeting are set to cross the wires today. Those minutes should give a better understanding of the central bank’s thinking, which may provide the Aussie Dollar with its next directional cue. Australia’s September jobs report is due out later this week, with analysts expecting a +25k headline print. China’s principal reporting agency delayed the release of the highly-anticipated third-quarter gross domestic product growth rate, leading many to believe that the numbers are worse-than-expected.

Get Your Free AUD Forecast

On the daily timeframe, AUD/USD’s Relative Strength Index (RSI) crossed above the 30 “oversold” level after the pair finished at its lowest level since April 2020 last week. The RSI also rose above the level on the weekly timeframe, compounding the bullish daily signal. A crossover above the 12-day Exponential Moving Average (EMA) would help establish the start of a potential uptrend. 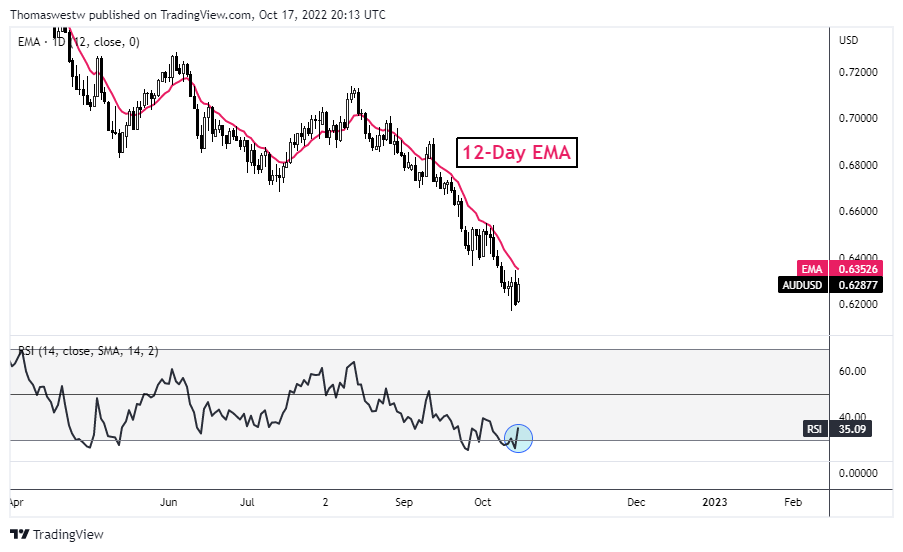