As Fed Hikes Rates, Will ARKK Continue to Sink?

As Fed Hikes Rates, Will ARKK Continue to Sink?
Advertisement

The fundamental backdrop has been deteriorating for risk appetite over the several months: the global supply chain is in disarray; commodity prices have surged, threatening both companies’ margins and consumers’ spending power; and central banks are pressing ahead with reducing stimulus and tightening monetary policy.

Until this fundamental narrative changes, it’s proving difficult for US equity markets to sustain a significant rally. Perhaps more specifically, this environment of reduced fiscal stimulus, tighter monetary policy, and compressed companies’ margins thanks to high inflation tends to weigh on stocks with smaller revenues and weaker earnings profiles. At the extreme end, those companies that are still in their early stages of growth, those seeking to achieve advancements that would change industries or the economy – newer tech stocks, for example – tend to suffer even more.

No ETF exemplifies this conundrum than ARKK. The ARKK prospectus states, “ARK defines ‘disruptive innovation’ as the introduction of a technologically enabled new product or service that potentially changes the way the world works.Companies within ARKK include those that rely on or benefit from the development of new products or services, technological improvements and advancements in scientific research relating to the areas of: DNA Technologies and the ‘Genomic Revolution’; Automation, Robotics, and Energy Storage; Artificial Intelligence and the ‘Next Generation Internet’; and Fintech Innovation.” 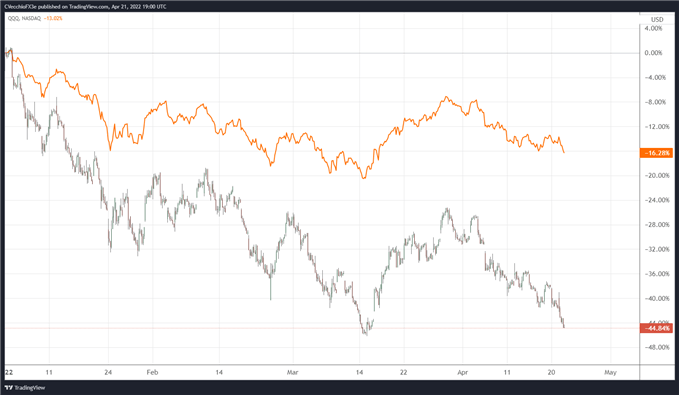 The simple, obvious answer is ‘yes.’ After all, ARKK is underperforming the US Nasdaq 100 significantly.

But the nuanced, truthful answer is ‘no, not necessarily.’ The types of stocks in which Cathie Woods invests tend to be growth-oriented bets on the future: these companies tend to be recently founded, having just gone public, and don’t have significant established revenues and cash flows, nor do they have substantial pricing power within their industries (what Warren Buffet collectively calls “the moat” of a company, akin to the defense around a castle).

In effect, the kinds of companies in which ARKK has in its holdings are extremely ‘long duration’ assets (yes, stocks by nature are long duration; but fledgling companies, particularly in the tech sector, to be on the longer end of the continuum). Conceptually, duration can be boiled down to this: if I invest $1 today, how long will it take to get back? As interest rates increase, assets with longer durations tend to suffer more; this is the case especially for bonds.

ARKK’s underperformance in 2022 is more about the particular style factor of its investments – assets that suffer considerably during periods of rising interest rates – rather than much of anything to do with Cathie Wood herself.